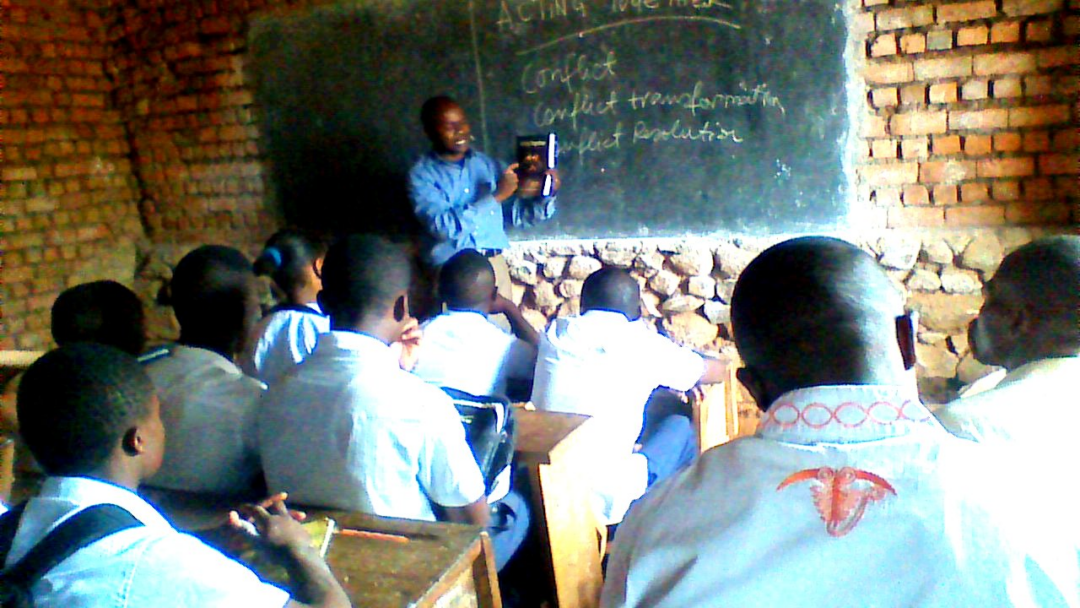 We have developed a new approach of resolving conflict peacefully through organizing workshops with teachers and pupils in order to strengthen and apply this approach in the Congolese contexts. This strategy is based upon the work of Professors Cynthia E. Cohen, Roberto Gutiérrez Varea, and Polly O. Walker. We have used the local media to cover workshops held in Bukavu/DRC. The main objective of our meeting was to use target groups for promoting the concepts of peace by organizing peace clubs in which pupils and teachers discuss some themes related to peace. We then work to ensure that these activities are covered by the local media in order to extend the peace messages to the wider community.

We use the Acting Together resources (Cohen, Varea, & Walker, 2011) because they focus the stories of creative and courageous artists and peace builders working in zones of violence, and demonstrate how performances of many kinds are used to support nonviolent resistance to abuses of authority, re-humanization of enemies, and reconciliation in the aftermath of violent conflict. These experiences are especially relevant to the Democratic Republic of the Congo where we live. It is a country facing many challenges such as armed conflict, youth manipulations, and land conflict.

Pupils of city of Makungu are learning Acting Together principles of nonviolence in order to avoid conflict and to promote peace in their milieu. This workshop has been covered by the local media in Bukavu/DRC.

In our meeting with the teachers and pupils in our peace clubs we find it useful to explain some of the critical concepts, like conflict, for example. When defining conflict, we use the work of Christian W. Bitela (2016:6 ) which explains that conflict can be positive and negative, and that conflict can actually help people and communities to grow if managed well. Similarly, William J. Kreidler (1996:1-3) argues that conflict is a normal and natural part of everyone’s life. He believes that conflicts are simply disputes and disagreement that occur between people, but we tend to think that conflict can also be positive. Conflict can lead to learning and growth. In fact, one could argue that without conflict there is no growth or progress, there is only stagnation. It is the constructive use of conflict that allows society to move forward. The Acting Together approach (2011:239) defines conflict as a form of difference between two or more parties that impacts them in significant ways. Conflict can be based on differences of values, power, or access to needed resources. It aims at gaining a better understanding of the context of the conflict and the parties’ roles in it. Conflicts typically go through cycles that can include stages such as latent or hidden conflict, emergence or articulation of conflict escalation, stalemate, de-escalation, resolution, peace building and reconciliation.

After setting out the nature of conflict, we turn to an exploration of conflict resolution, which is concerned with a range of methods for addressing conflict that rely on the faith in the rationality and the fundamental good will of people. Processes of conflict resolution generally include negotiation, mediation, and diplomacy. This strategy attempts to transform conflict by addressing human conflict through nonviolent approaches that increase mutual understanding and respect. Different scholars explain that conflict transformation is flexible, although it does have structures and processes, and it views peace as a continuously evolving and developing quality of relationships. Devanand Ramiah in Acting Together (2011:255) argues that a creative transformation of conflict is an open window on how artists and practitioners can address ethical dilemmas and risks of doing harm. This view strengthens the potential collaboration between peace building and performance fields. We think that by involving teachers and pupils, as we have done at Makungu, in theatrical productions on peace, we may wisely resolve some problems in the Congolese contexts. It is quite important to invest in pupils and teachers in this approach to transforming conflict so they use it in their daily lives. When we talk about conflict transformation, we refer to fundamental change of human beings such as youth, women, and journalists and so on.

This meeting involves pupils in order to teach them about the reality of violence against women in the UNSCR (United Nations Security Council Resolution) 1325. Our meeting has been covered by the local media and a journalist spoke to some of our students on a theme related to “Youth and Journalism” in promoting peace in the Congolese context. Given our positive experiences with our workshops for teachers and students, we believe that it is important to organize different peace building clubs at schools.

The meeting of teachers and journalists are reflecting of the mechanism of avoiding conflict which affects the eastern part of the DRC.

The word creativity can mean a process involving the discovery of new ideas or concepts, or new associations of existing ideas or concepts, fueled by the process of either conscious or unconscious insights. In this way, we share the same view with Lederach (2011:11) which describes the capacity required for the creative transformation of conflict as ‘moral imagination’. It allows individuals to simultaneously stay grounded in the troubles of the real world and be open to the possibilities of a better one.

Christian W. Bitela (2016:6): A field analysis of the dynamics of conflict in the South Kivu/DRCongo.  Edition Universitaire Européennes en Allemagne.

By WALUNGWA BITELA Christian
Email: bitelachristian@yahoo.fr
He is a peace maker.
Our core business:
Carrying out research in the field of peacebuilding, sexual violence and human rights.
Share experience with different stakeholders during seminars, symposium and workshops as needed.
Publish books and articles in the field mentioned above.