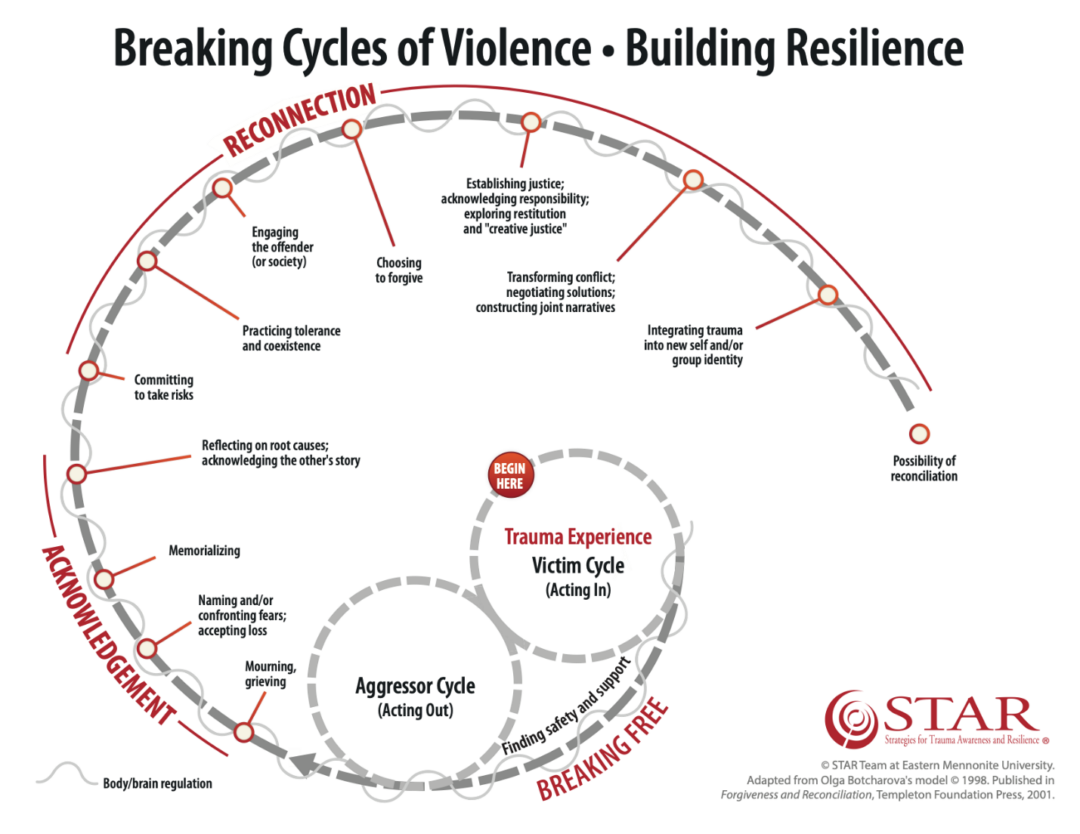 A Model to Examine Trauma and Violence

What are the commonalities in the progression of violence? Are there defining characteristics in breaking free from, or repeating, that cycle? What role does trauma play? These are some of the questions the Snail Model attempts to answer. This model, which is also referred to as Breaking Cycles of Violence – Building Resilience, as seen in the image below, is one I have students use in my Global Peacebuilding course to analyze global events and stories throughout the semester.

The model originates from Olga Botcharova’s research on forgiveness and reconciliation, formed by her experience in former Yugoslavia. Her work was expanded on by the Center for Justice and Peacebuilding at Eastern Mennonite University to develop the current version of the model. The central focus of the model is on the influence of unhealed versus healed trauma. The model focuses on defining characteristics in the progression of violence as well as those in the progression of breaking free from the cycle.

Most recently, my class applied this model to the book, The Gift of Our Wounds by Arno Michaelis and Pardeep Kaleka. This autobiographical text tells the journey of two men that have walked different paths of trauma, violence and healing. Ultimately their life journeys overlap, and they form a powerful partnership in global peace work.

The task students had in my class was to identify specific examples in each man’s journey where the men appeared along points in the Model. For example, experiencing survivor guilt, loss of meaning or fantasizing about revenge placed the men in early stages of the progression of violence (also referred to as the Victim/Acting-In Cycle in the image below). While embracing “Us versus Them” identity, viewing violence as redemptive, and dehumanizing others, placed them further in the progression (also referred to as the Aggressor/Acting Out Cycle in the image below). Lastly, students identified examples in each man’s story of breaking the cycle. Examples on the model for this include naming fears and accepting losses, memorializing, and reflecting on root causes.

My hope in engaging this model with students is to shine a light on the interconnectedness of trauma and violence, as well as the significance of inner thoughts and individual or collective shifts in perception. These elements are often neglected for their perceived insignificance and can become the foundation of horrific violence.

I have found this model to also serve as a powerful form of self-reflection in examining one’s personal journey through trauma and violence. These different facets of the model have led to insightful and transformational discussions in the classroom that integrate both the head and heart of students.